After a long but comfortable 24 hours in Business Class (thank you Emirates) we finally arrived in Barcelona. Although being a long haul flight, jet lag hadn’t hit us yet and we were excited to explore the town.

We planned to stay with a friend, Dora, whom we had only communicated over WhatsApp while we were still in Sydney. See, she was introduced to us by our other friends who met her while they were travelling a year ago. Anyway, we chatted over WhatsApp and she was kind enough to let us stay over for a few days.

Following a short taxi ride to Dora’s apartment, we were greeted by Dora’s good friend Zuza (Dora was in London for work). Zuza was so welcoming and we were excited to learn more about her life over the coming week.

After unpacking and making ourselves feel at home, we headed out to roam the streets of Barcelona! The sun was out, there was not a cloud in the sky – the weather was perfect! About an hour later, we made the small trek back to our apartment and crashed for the evening – jet lag had kicked in.

Over the next 5 days, we explored a lot of the historical monuments around Barcelona city. With a lot of the cities finest architecture being created by none other than Antoni Gaudi, we were in absolute ore of the sheer detail and craftsmanship of his designs. Gaudi’s works included La Pedrera, Parc Güell, Casa Batlló and La Sagrada Família.

We also visited the Gothic Quarter, an area of endless alleyways and buildings dating back to the Roman times. With its medieval feel, we stumbled across Gothic Cathedral, Plaça del Rei and the famous La Rambla. La Rambla is a long street filled with lots of stalls, markets and restaurants – we were in love instantly!

On one of the nights, we were lucky enough to experience an outdoor movie at the iconic Montjuic Castle. We joined together with Zuza and two of her friends, Tuomo and Kris, ate delicious snacks and watched Quentin Tarantino’s “The Hateful Eight”.

Barcelona is not only famous for its architecture, but also the delicious cheap food and booze! During our stay, we indulged in Pintxos, Paella, Pizza, and not to mention, Patatas Bravas (and many Estrella’s). Also on the menu one night was a very interesting meat delicacy, beef hearts – thanks Zuza 🙂

We had the time of our lives in Barcelona and are so grateful for the new friends that we met during our journey. Next stop – London! 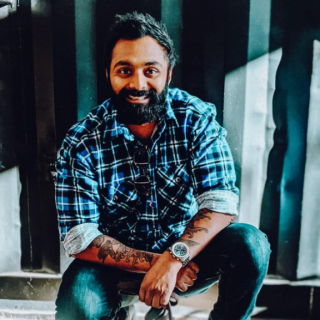 Hi, We're Sav and Brittany, collectively known as 'Savney', we both met whilst working at the McDonald's head office in Sydney, Australia in 2014. We recently got married in March 2017 and in June 2017, we resigned from our jobs to travel the world.